Try out manufacturing for a day 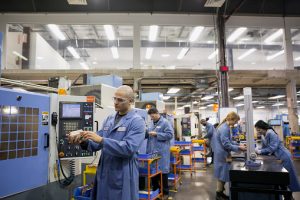 Event organizers encourage businesses to build interest in their industry by hosting tours and open houses that give students hands-on experience and help them explore manufacturing careers. There are more than 2,500 events scheduled throughout the country on October 5. Check out the interactive map to see locations of all associated events, and find one in your local area.

In support of this event, the National Association of Manufacturers put together the top 20 Facts about Manufacturing. Highlights include: